The IVR Chairman’s Charity Prostate Cancer UK recently interviewed Irvine Welsh, of Trainspotting fame, following his support for its fundraising and awareness campaign in partnership with McEwan’s beer and he began by saying 'The Trainspotting characters are all at the age to be affected by prostate cancer’.

The 59-year-old novelist stripped off for Prostate Cancer UK’s partnership with McEwan's beer, which will see all profits from their McNificent boxer shorts donated to the charity. He explained why the pub is so important to get the message out to his generation, and why he'd like to go for a drink with Trainspotting’s Renton (played by Ewan McGregor).

Before you got involved in the McEwan’s campaign, were you aware of prostate cancer? I always thought the prostate was a sexual version of the appendix and you could get rid of it and it wouldn’t matter. I kind of knew it was the point where a lot of cancer starts for men and spreads, but nothing else.

Why do you think men have this stiff upper lip about their health? I think there is a whole generation of guys, in Scotland, but in the world in general, who are quite strange about their bodies in a lot of ways. It feels like it’s primarily a sexual thing because of where the prostate is, but it’s also a kind of infantile mentally where they don’t like to talk or think about it. I think it will change, though. Thirty years from now, the generation in their 50s will have a different, more pragmatic view.

Health is something you seem quite conscious about now. Have you spoken to your GP about prostate cancer? I haven’t, no. I live in America and I have my annual physical review where they test everything – stick things down your throat and up your bum etc. It seems to be culturally more acceptable to talk about prostate cancer in America than it is here, and they have a lot more knowledge and awareness of what it is and the potential jeopardy of it.

Why is the pub such a good place for Prostate Cancer UK to raise awareness? Men are still very pub-orientated – that’s where they meet and talk. You can have posters and badges, but peer education of the mouth is still the most effective way of getting any message across. If you have that sense of ownership and are part of a culture where you're able to talk about it, then it makes it much more effective getting that message across.

Who from your most famous novel, Trainspotting, would you most like to have a drink with? I think it would be Renton. I think I’d have a good conversation with him. The characters are all at the age where they could be affected by prostate cancer – perhaps I should write a Trainspotting 3 about that!

Use the code PCUK20 to get 20 per cent off one pair of boxer shorts. *The code can be used once per user, excludes sale items and cannot be used in conjunction with any other 20 per cent codes. (The coupon also has a maximum usage – 100 uses.) 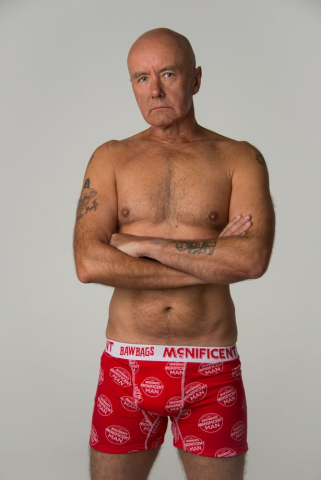