In January the Institute of Vehicle Recovery (IVR) announced the Chairman’s Charity for 2018 would be Prostate Cancer UK. This announcement came only days before the charity released the findings that UK men dying from prostate cancer has overtaken female deaths from breast cancer for the first time. The charity said advances in the diagnosis and treatment of breast cancer are paying off, and increased funding could benefit prostate cancer. With fundraising in mind Prostate Cancer UK will ‘March for Men’ again in 2018 – with an even bigger and better walking programme unveiled as the charity makes further strides to stop prostate cancer being a killer.

After a successful launch of the charity’s flagship walking campaign last year raised more than £1 million, there is even more reason for people to put their best foot forward and combat the most common cancer in men. Stepping up to the challenge, the leading men’s health charity will be recruiting an army of walkers to make strides through picturesque parklands up and down the country, and save lives in the process. The walks, of either 2.5k, 5k or 10k, will take place across seven cities throughout  the UK in June, with families, friends and loved ones pulling on their walking boots to ‘March for Men’. Starting with a North West double header in Manchester and Liverpool on Sunday, June 10th, the countrywide quest to fight back against a disease that kills one man every 45 minutes continues across Father’s Day weekend (16-17 June), with London, Bristol and Glasgow also hosting the family-friendly walks. The marches continue in Leeds on June 23rd before concluding a week later in Nottingham, on Saturday 30 June.

Football fans in London and the South East will also have the option to take part in an epic series of convergence marathon marches across the capital on Sunday, 22nd July, all culminating at Wembley. The Football March for Men will see legions of walkers setting off on the road to Wembley, starting out from four clubs, West Ham United, Millwall, St Albans City and Sutton United, and heading to the home of English football. The march to the arch will take in 15 clubs and create a fabulous finale.

For more information, guidance or to discuss any concerns you may have regarding prostate cancer go to www.prostatecanceruk.org 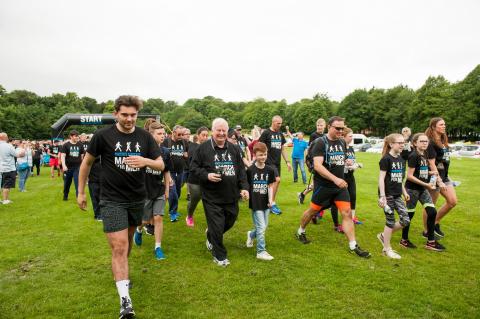