Following a meeting of the All Party Parliamentary Group (APPG) in June last year it was suggested that inviting members of the Group to a live recovery demonstration would give an insight into the challenges of vehicle recovery in an Emergency Refuge Area (ERA).

Due to the logistics and APPG members workload and commitments it was decided the best way forward would be to produce a ‘real time, film of several recovery scenarios which would then also provide an operational best practice video for use by the recovery industry and be available to be shown to the Transport Select Committee (TSC).

After many months of collaboration between Mac Hobbs of the IVR, Andy Eade, Operational Standards team leader at HE and Steve Ives of SURVIVE a meeting of the Smart Motorway All Lane Running Practitioner Group was held. Invitees included members of SURVIVE Working Group One and other representatives from across the vehicle recovery and transport sector.

At this meeting the practicalities of producing the film, general planning of the event plus finalising the formal list of invitees took priority, with IVR president Nick Ovenden taking the lead with the design, planning and execution of the various recovery scenarios.

The date was confirmed and in February the Emergency Refuge Area (ERA) Procedures Workshop was held on the M96, a mock motorway within the grounds of the Fire Service College in Moreton in Marsh.

The day began with Andy Eade (HE) and Mac Hobbs (IVR) welcoming guests followed by an overview of the day and explanation as to how they had reached this point. It was then followed by a comprehensive presentation by Max Brown, Head of Smart Roads – Safety, Engineering & Standards for Highways England who explained the evolution of All Lane Running (ALR) smart motorways and the ongoing reviews being carried out on ERA spacing, signing, customer insight, conspicuity and other considerations. He then went on to set out the goals for the day:

Following the briefing guests and representatives of the three organisations were transferred by coach to the M96. A bay had been marked out replicating the size of an ERA on an All Lane Running (ALR) smart motorway, plus a secure viewing area for guests. There was only one uninvited guest on the day, Storm Doris, but it was pointed out it was just another day when you are working in the recovery industry.

The planning of the scenarios had been meticulous, with several run throughs on the previous day. The idea was to make it as seamless as possible with two scenarios in the morning then everyone back on the coach to go to lunch and three more in the afternoon. The preparation paid off and by the end of the morning session, even with Storm Doris’s visit, the team were well ahead of schedule with three completed.

In order to give both the feel and show the hazard of working in live lanes vehicles, including cars of varying sizes and an HGV, were driven constantly in a loop to simulate a busy motorway. Flow was only stopped or redirected on the instruction of the Highways England (HE) Traffic Officers (TOs).

In order to make the guests feel involved the first scenario included them. As they were coached down the M96 the driver pulled into the ERA bay saying there appeared to a problem with one of the tyres, HE control centre was notified. As the coach sat in the ERA waiting for the TOs to arrive the HGV drove past in Lane 1 at only 40 miles per hour but some on the coach were visibly shocked at the closeness of the two vehicles and the way it rocked the coach, someone said it felt just like being buffeted on a boat in rough seas.

TOs arrived to manage the recovery and temporarily closed Lane 1, coach passengers disembarked supervised by the TOs and were taken to a place of safety. The tyre fitters arrived and entered the ERA, elevated the coach to simulate a tyre change then lowered the coach and cleared the scene.

A car breaks down in Lane 2, while the ERA is still occupied by the broken down coach. TO carries out risk assessment and the vehicle is pushed into the Lane 1 closure by TOs, a light recovery vehicle arrives and clears broken down car. The tyre fitter and coach exit the ERA while Lane 1 closure still in place, closure removed and scene cleared.

Scenario 3 – Recovery of car and caravan from ERA

A car towing a caravan has pulled into an ERA. Vehicle recovery makes an assessment on approach, identifying that assistance is required to access the ERA. A call is made to HE control, following liaison between the technician and HE a rolling road block is requested. TOs arrive at the scene and establish a rolling road block. A flatbed recovery vehicle arrives, enters the ERA, recovers the car and caravan and leaves the scene. TOs remove the rolling road block. The reality of this particular recovery was enhanced by the exceptionally high winds of Storm Doris.

When the rolling road block in scenario 3 was removed an HGV had broken down in Lane 2 just upstream of the ERA. TOs arrive and establish lane closure.

This enables the TOs to demonstrate the Enhanced Carriageway Clearance (ECC) by towing the HGV using their load cell equipment to move the casualty into the ERA.

Scenario 5 – Recovery of a Luton van from the hard shoulder

This scenario showed how the warning beacons on recovery trucks are blocked from view to oncoming traffic when loading high vehicles on the hard shoulder or live on a dual carriageway.

At a follow-up meeting held at Highways England, Quinton, on 1 June attendees were shown edited clips from the film and informed the additional footage of live recovery scenarios on the M25 will be filmed this month and included before final editing for the September launch at the Tow Show.

Other items on the agenda included plans to ensure the continuation of dialogue, future developments and the sharing of agreed protocols. 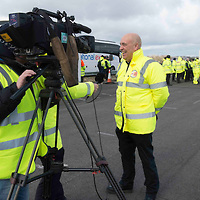 Mac Hobbs of the IVR said;

‘This process has brought together stakeholders from across the vehicle recovery and transport sector and has proved very positive. Sections of the industry who previously worked relatively independently are now working together to improve safety for those working and travelling on All Lane Running smart motorways.

We’d like to thank everyone who was involved in the recovery demonstrations, the invited guests who attended in fairly inhospitable conditions and members of the ongoing Practitioner Group, many of whom will be attending the launch of the film at the Tow Show in September.’

Details of the Tow Show launch will be announced in due course.